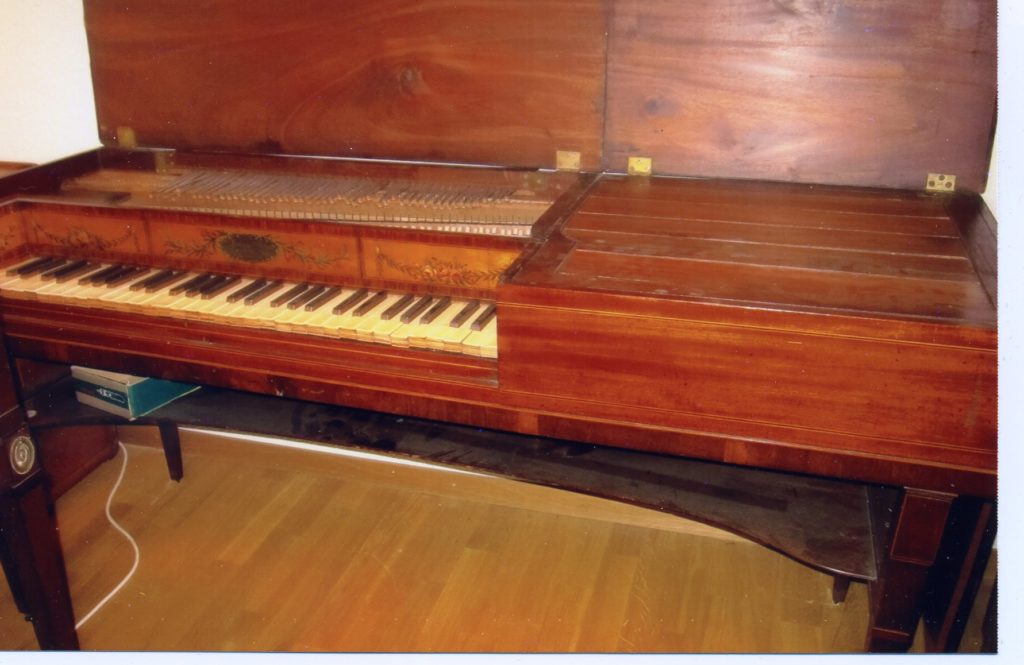 This square piano is one of the rare surviving instruments with a “Venetian Swell”.

The case and the original stand are made of solid mahogany and framed with ribbon inlays. The stand has a small shelf (“music shelf”) and is decorated with oval brass fittings. The lid is completely divided and above the soundboard it has a rare “Venetian swell” with five lamellas made from mahogany. These “Venetian Swells” are originally found in a few English harpsichords but they are extremely rare in square pianos. The dynamic changes that are possible via the action is reinforced by the swell.

The instrument has an English single action and is double strung. The keys are made of ivory and ebony. The nameboard is divided into cassettes, each decorated with garlands, flowers and tendrils. In the centre is the signature:

When dating the instrument it is clear that the date on the nameboard was subsequently changed and received a younger dating, which can not be correct, since Ferdinand Weber died in 1784. The original right year number has been painted over.

Altering the dates of instruments to make them older was often find in later years when the interest for these instruments arose (see the Pohlman square piano 1767 in the Eric Feller Collection – click here). A dating to “rejuvenate” the instruments is extremely rare, but also occurred. It can be assumed that this “new date” was made in very early days. One reason could be that the instrument was probably sold again in the late 1790s. It is known that there was already flourishing sales of used instruments. In order to increase the chances of a quick sale instruments were dated newer.

The small shape of the piano as well as the compass of 5 octaves (FF,GG – f3) are clear evidences to date the instrument to the mid 1770’s.

The state of preservation was very good and the entire instrument was in absolute original condition and apparently never touched before.

Ferdinand Weber (originally Ferdinand Webber) was born on May 6, 1715 in Borstendorf, Saxony and learned from 1728 to 1735 organ building with Johann Ernst Hähnel, who was the royal organ builder of the King of Poland and Duke of Saxony.

Weber moved to Dublin in 1739, after spending several years in London. In Dublin he built organs for several churches and was also active as an organ tuner (Christ Church Cathedral and Trinity College). Furthermore, he built harpsichords, spinets and from 1772 (the increasingly popular in those days) pianos after the model of Zumpe. His reputation as an organ and harpsichord maker was so great that he attracted the interest of Georg Friedrich Händel during his visit in 1741 in Dublin.

His workshop was initially at 1739-1749 in the Werburgh Street, later from 1749 to 1755 in the Marlborough Street and last from 1776 until his death in 1784 in additional rooms in the Marlborough Street 71.  After his death, the company was continued for a short time by his son Thomas Ferdinand Weber, before being taken over by William Southwell in 1787. (see Grattan F / DUBLIN, 139 ff, James / EARLY, 78)