From Harpsichords to Fortepianos – The Kirkman Dynasty 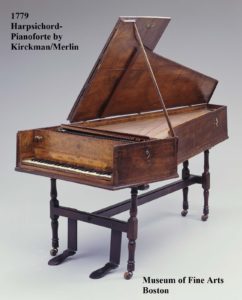 The Kirckman (Kirkman) family were one of the most famous instrument makers of the late 18th century. Over a period of about 150 years instruments of the highest quality were produced.

The company was founded by Jacob Kirchmann (later anglicised in Kirckman / Kirkman) who was born on March 4th 1710 in Bischweiler in Alsace. The family originally came from Aargau in Switzerland. Jacob Kirchmann became a carpenter and went to England in the early 1730s. There he learned and worked for the famous harpsichord maker Hermann Tabel, whose widow he married in 1738. In 1755 he became a British citizen. He died June 9th 1792 in Greenwich and was buried in the St. Alfege Church.

The largest productions of harpsichords in England in the 18th century were made by Kirkman and Burkhardt Tschudi.

The instrument design was based on the instruments by J. Ruckers except the case was not painted but decorated with fine inlaid work.

All instruments were very well made and of extraordinary quality and craftsmanship. The writer Frances “Fanny” Burney (1752 – 1840), daughter of the well-known music historian and composer Charles Burney (1726 – 1814), described Jacob Kirkman as the best harpsichord maker of all time. Additionally, in 1779 John Joseph Merlin improved a harpsichord by Jacob Kirckman with a down striking hammer action (now in the Museum of Fine Arts in Boston, USA). The last harpsichord by Kirkman was built in 1809.

Abraham Kirckman, who was also born in Bischweiler on June 2nd 1737, was the nephew of Jacob Kirckman. He followed his uncle to London and in 1772 became his business partner. He died in April 1794 in Hammersmith.

The company’s oldest surviving harpsichord was made in 1744. Later, as the harpsichord slowly went out of fashion, the company specialized in pianos. An early example of the outstanding pianos is shown by the Square Piano Jacobus et Abraham Kirckman from 1783.

In the period around 1806, the spelling Kirckman changed – the “c” was omitted and instruments from then signed with the new spelling Kirkman.

Under the direction of Joseph Kirkman II, the company produced instruments for Queen Victoria and the Portuguese Maria das Neves of Braganza.