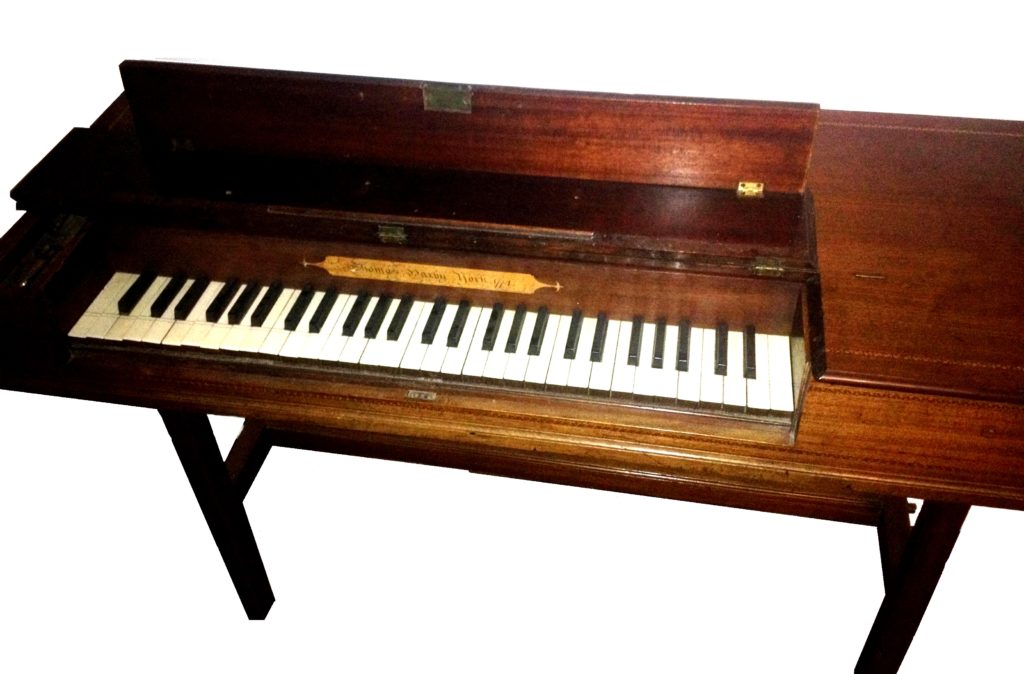 This early square piano by Thomas Haxby was built in York in 1774 and belonged for many years to the Colt Collection in England. Haxby was considered an outstanding spinet and piano maker.

The case of the instrument is made of mahogany with inlays in different woods. The instrument rests on the original trestle stand which has also been made in mahogany. The lock at the front is decorated with a filigree brass front.

The keyboard is made in ivory and ebony. The small hammers are covered with leather and the instrument is double strung.

On the left side are three stops for divided dampers and lute. On the nameboard is the signature in an elongated cartouche:

This early (currently the third oldest surviving) square piano by Thomas Haxby is an outstanding example of the excellent work of an instrument maker who was not working in London but in York. The oldest dated instrument dates back to 1772.

After serving as a sexton at the St Michael-le-Belfry Church in York and as a singer in the York Cathedral he opened his own store on Blake Street on 20th June 1756, promoting it in the Yorkshire Courant with “Musical Instruments at T. Haxby’s warehouse Blake Street are made and sold “.

On 28th December 1770 he patented a new harpsichord action by adjusting the registers on pedals for single-manual and double-manual harpsichords (Patent No. 977).

In 1787 the annual production of square pianos was 24 instruments and reached 36 instruments in 1790. (The New Grove Musical Instruments Series – Early Keyboard Instruments)

During his lifetime Haxby was considered one of the best instrument makers and was highly respected by contemporaries.

Other surviving instruments by Thomas Haxby: