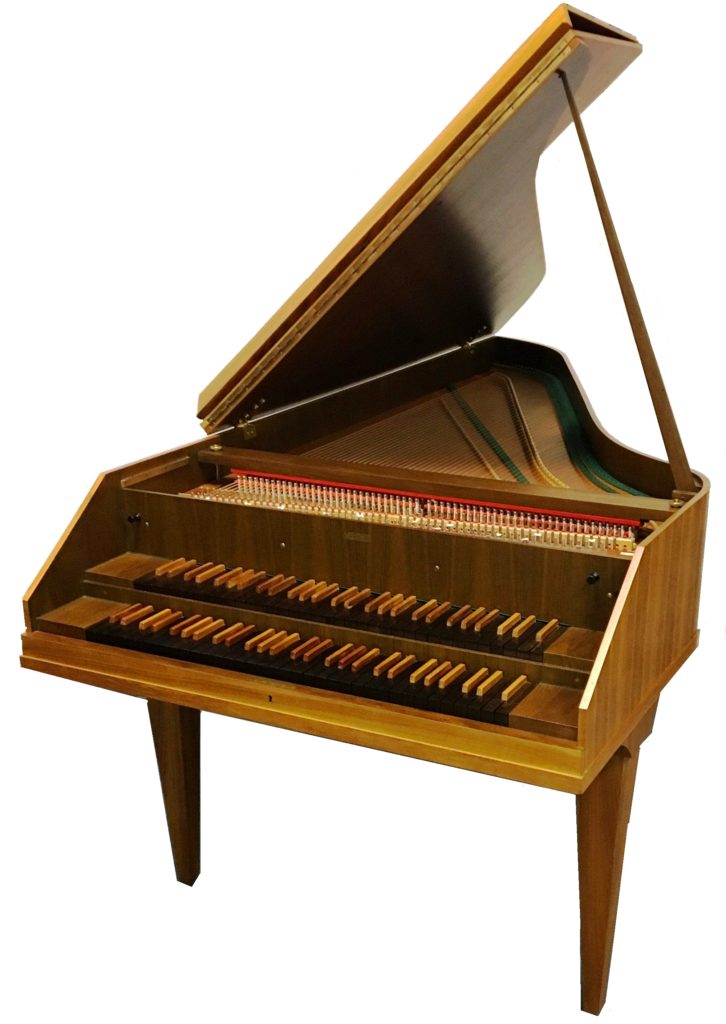 This two-manual harpsichord by Martin Sassmann is a reference of the modern harpsichord construction in Germany in the 1960s. Since the revival of this type of instrument at the end of the 19th and beginning of the 20th century, instruments were increasingly being built that were based on modern piano construction. This new harpsichord movement, led by Wanda Landowska, attempted to produce improved instruments that would fit the modern needs of the time. These new types of harpsichords have nothing in common with the original historical instruments. However, it was precisely these new instruments that inspired many composers such as Francis Poulenc, Jean Françaix or György Ligeti. They are now an integral part of the modern history of keyboard instruments.

This instrument is made in the typical “Rastenbauweise” (industrial/serial construction) of that time. The curved shaped case is made of cherry wood and has an open soundboard at the bottom. The jacks are made of plastic with leather plectrums. Furthermore, it has five pedals (registers and coupler) and 3 hand stops (buff). On the nameboard is the signature “Sassmann“. The serial number 1768 is stamped on the right side of the wrest plank.

According to old sales catalogs of the Sassmann Company, the instrument is the model named “Schütz“, according to the composer Heinrich Schütz (1585 – 1672). The designation of individual models of harpsichords to well-known composers was very popular in the 1950s – 1970s by many harpsichord makers (Neupert, Sperrhake, Wittmayer, etc.) – but there were no historical references from instrument to composer.

The sound of the instrument is absolutely voluminous, brilliant and offers a variety of timbres according to the many registers and registration options. Because of its modern construction it is a completely new instrument and the sound is not comparable to historical harpsichords.

The disposition of the harpsichord is:

This disposition is the so-called “Bach disposition” which goes back to the dispositions of a harpsichord in the Musical Instruments Museum in Berlin. The harpsichord in the Berlin collection, which was probably built by Johann Heinrich Harrass (1665 – 1714), acted as some kind of prototype with its dispositions for the newly build harpsichords (see: H. Henkel: „Der Cembalobau der Bach-Zeit im sächsisch-thüringischen und im Berliner Raum“, in: „Bericht über die Wissenschaftliche Konferenz zum II. Internationalen Bach-Fest der DDR“, Leipzig 1977, pp. 361–374.)

The instrument by Harrass supposedly came from the possession of Wilhelm Friedemann Bach, who is said to have inherited it from his father Johann Sebastian Bach. However there is no proof of this. It can be assumed that the aura of the name and the alleged provenance of Johann Sebastian Bach have contributed decisively to the fact that precisely that instrument in Berlin acted as a prototype.

Martin Sassmann was born in 1924. In the Second World War he was a pilot and started his apprenticeship with J. C. Neupert in 1948 which he finished in 1953 with his master examination. In 1955 he opened his own workshop in Lennep. The growing business moved in 1966 to Hückeswagen-Wiehagen. Since the opening of the company in 1955 to 1969 and with about 20 employees a total of about 1500 instruments have been built. The annual production included about 45 double manual harpsichords, 50 single manual harpsichords, 20 spinets and 4 clavichords. (See: W. J. Zuckermann: “The Modern Harpsichord” 1969)

In 1987 the business changed its name to “Sassmann & Kramer” and in 1990 was transformed into a GmbH. After several other business partners, the company closed in 2009.

In the late 1960s and 1970s the company started producing instruments in a historical style, following the trend and demand for historical copies.