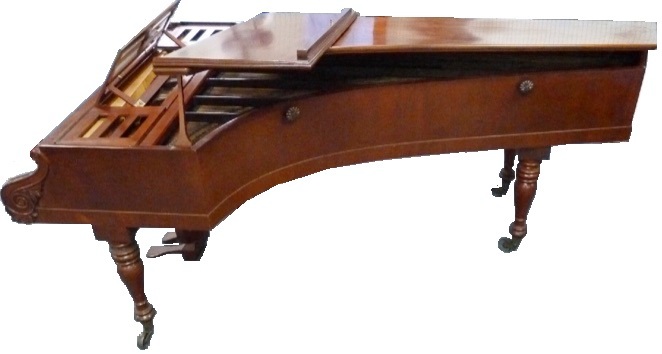 This elegant concert grand fortepiano made by the traditional company of Broadwood and Sons shows an important step in the evolution from the first fortepianos at the end of the 18th century to the modern pianos of today. Today there are only a few instruments from the 1830s by Broadwood known.

The case is made in mahogany in the style of George IV. The keyboard is made of ivory and ebony, the hammers are covered with felt, triple strings (except the last 6 notes in the bass, which are double strung) and the instrument has got single dampers.

The piano stands on four small baluster legs and has a wooden lyre with the typical two Broadwood duckfeet pedals for controlling the dampers and due corde / una corda. The compass of the keyboard is 6 ½ octaves (CC – f4).

The serial number (12231) is written in ink on the left side of the wrest plank . On the right side there are the initials “A. D.” and the year of construction “1830” written in ink.

The nameboard bears the inscription in a brass decorated cartouche:

Makers to His Majesty and the Princesses

Due to the large length of 241 cm and the triple strings, a larger volume of sound can be generated. To increase the sound, Broadwood experimented with metal reinforcements in the 1820s. In 1827 they patented a small hitchpin plate – a single metal plate into which were set all of the hitchpins. The longitudinal metal bars above the strings were fastened to the metal hitchpin plate, which was screwed into the wooden block beneath. This invention was similarly quickly copied by other companies such as Pleyel (1828) or Pape (1828). Furthermore, the piano has four metal struts in the treble.

This rare fortepiano shows an absolutely authentic sound of early romantic period in England, which is very different from the ideal on the continent, such as in France or Austria. 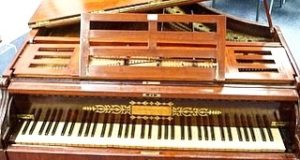 In 1761 he started working for Burkat Shudi (1702 – 1773) in London and in 1770 became his business partner. In 1771 he opened his own shop on Great Pulteney Street in London. In 1769 he married Burkat Shudi’s daughter Barbara in her first marriage and had four children with her. After his wife’s death in 1776 he married Mary Kitson in 1781 and had six children with her. He died on 17th July 1812 in London. Controling

Other surviving instruments by John Broadwood and Sons: