The instruments of John Broadwood were in the late 18th and early 19th centuries much sought after. As a result a large number of instruments were produced.

The case of the instrument is made of mahogany with revolving band inlays in different woods. The instrument itself rests on a “french stand” and “music-shelf” under the instrument. On the sides are brass applications for covering the screws of the frame. The keyboard is made in ivory and ebony.

The instrument has a pedal for using the dampers. The action is a simple single action with leather covered hammers and the typical Broadwood underdampers (these dampers were patented by Broadwood in 1783). The instrument is double strung and above the action and soundboard is the original dust-cover (covered with green silk). On the underside of the dust-cover are different handwritten entries. There are poems and small diary entries about everyday life in the countryside. The name “Betsy Ellis” appears more often. It is likely that the instrument comes from her possession and has been described over the years by her.

The nameboard is made of different woods and is signed in a cartouche with:

Makers to His Majesty and the Princeses

Under the dust cover is the serial number: 5507.

On the right side of the case are the initials “B. L.” imprinted. The 58th key is handwritten signed with a “B“.

Other surviving instruments by Johannes Broadwood and Son: 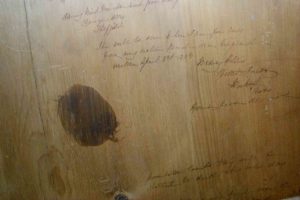