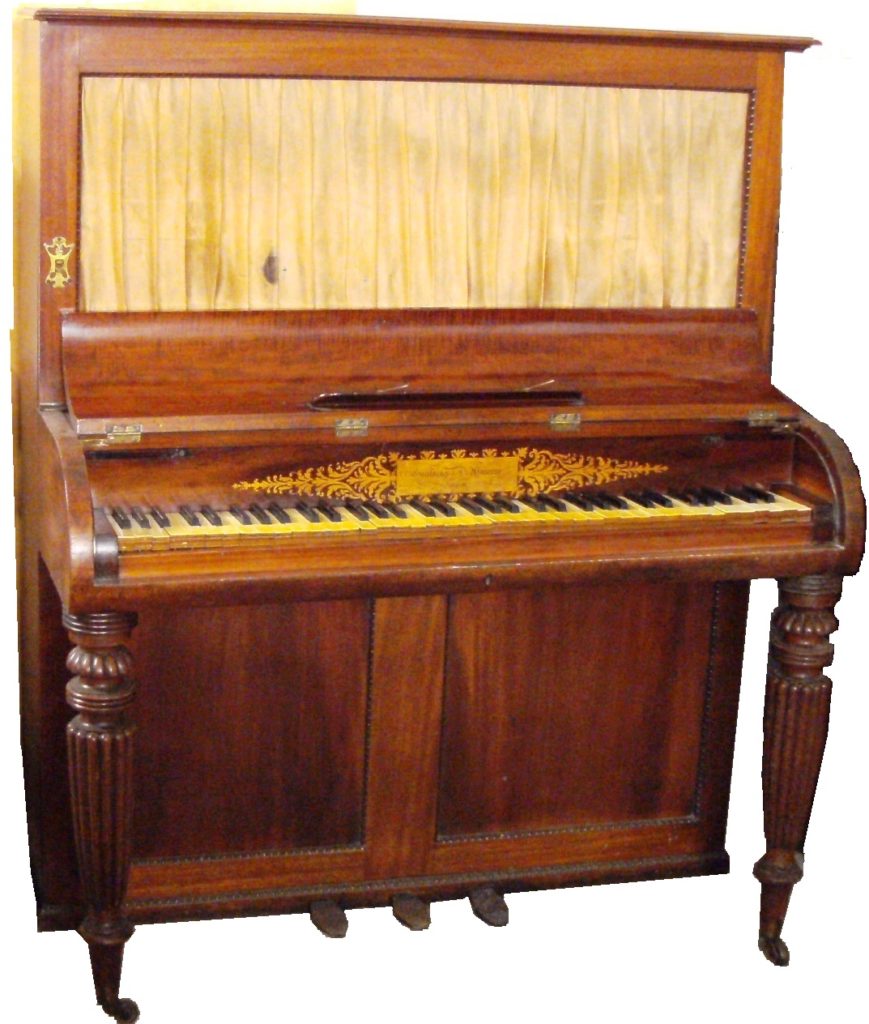 This charming little piano is an early example for the rare upright pianos in England at the beginning of the 19th century. Upright instruments in this small form were far less common than the popular square pianos.

The instrument was made between 1823 and 1834 by “Goulding & D’Almaine” in London. The solid mahogany Regency style case is decorated with various inlays. The front is covered with the original silk. The keyboard is made from ivory and ebony. At the ends of the keyboard there are two retractable candle holders which can be pulled out via a small ring. The instrument has three wooden pedals (dampers, una corda and swell). The use of a lid swell is known by square pianos but only a few upright instruments have this feature too. Inside the piano is a mechanism which can lift the lid via a pedal. The compass is 6 octaves (FF – f4), the hammers are covered with felt and the instrument is double strung. The action is an English double action with abstracts. The nameboard is decorated with various inlays and bears the signature:

On the action is a second handwritten signature:

This indicates that the instrument probably comes from Bath or the surrounding area. In the 18th and early 19th centuries Bath was a popular place to be of the often art-loving aristocracy.

The instrument impresses with its small dimensions and excellent workmanship.

“Goulding & D’Almaine” was founded in 1785 by George Goulding at No. 25 James Street, Covent Garden. In 1798 Thomas D’Almaine and Phipps (the first name is not yet known) join the company to “Goulding, Phipps & D’Almaine” until about 1810 (sometimes there is also the name “Goulding & Co.” found on instruments of that period). After around 1810 Phipps left the company and another partner with the name Potter joined the company. Again, no first name is known. The company was from then on named “Goulding, D’Almaine, Potter & Co.” and was at No. 124 Bond Street, from where they moved in 1810/11 to No. 20 Soho Square. From 1803 to 1816 the company had a branch at No. 7 Westmoreland Street in Dublin. Potter left the company in 1823 and from then until 1834 the company was known as “Goulding & D’Almaine” or “Goulding, D’Almaine & Co.” (the company also acted as a music publisher). The name “D’Almaine, Potter, Wood & Co.” dates from 1834 until about 1840 when James Wood (a woodwind instrument maker) became a partner. By this time Goulding’s nephew Thomas Mackinley had already become a partner in the company. George Goulding retired completely in 1847 and his nephew took over the company until his death. (See M. Clinkscale: Makers of the Piano 1700-1820, Oxford University Press 1999)

Other preserved instruments made by Goulding & D’Almaine: