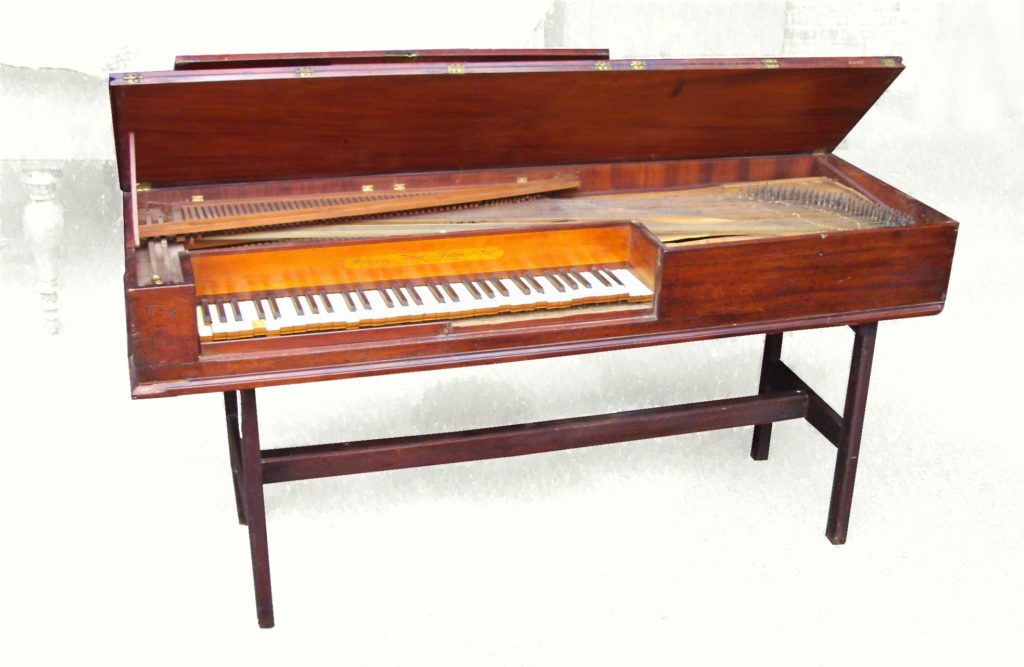 This square piano is a typical example of the 1770s instruments in England. The delicate instrument convinces with simple elegance and a charming sound.

The instrument rests on the original stand (trestle-stand). Both are made of mahogany with encircling inlays in different woods. The instrument has a single action and two stops for controlling the dampers.

The compass of the instrument is 5 octaves (FF – f3) and is double strung. The keyboard is made of ivory and ebony.

Unusual is that the tuning pins are arranged semicircular and not straight on the wrestplank. Furthermore the hammers are made extremely thin.

So far only a few instruments have been preserved. Interesting is that Pether signs his instruments with two different signatures on the nameboard. On some instruments there is the signature:

“Mr. Kirkman” shows the connection to the workshop of Kirkman for which he must have worked earlier or possibly had learned there. It can be assumed that Pether used this type of the signature in order to be able to sell a larger amount of his instruments by advertising with Kirkman. The company Kirkman was considered one of the best companies with a long tradition in harpsichord and piano making. A similar form of advertising can be found in the instruments of the company Schoene & Co. who advertised with Johannes Zumpe. (see Square Piano by Schoene & Co. 1788)

About George Pether is only very little known. Because of his name it can be assumed that he had German-speaking roots like many instrument makers in the 18th century. He was active as an instrument maker from about 1775 until his death in 1794. He had his workshop in John Street No. 16 and Oxford Street No. 61. According to M. Clinkscale he invented a down striking action which he did not patent.

Other preserved instruments by George Pether: