The “Forte-Piano en forme de Clavecin” has a harpsichord shaped case. The case is made of solid mahogany with revolving fire-gilt bronze in the Empire style. The bronzes show laurel wreaths, lyres and bells. The three tapering legs are also decorated with bronze ornaments at the upper ends. The keyboard is made of ivory and ebony, the hammers are covered with leather, triple strung, split bridge and the instrument has a single damping. In the middle there are 4 wooden pedals for: dampers, lute, moderator and una corda / due corde. The compass of the keyboard is 5 ½ octaves (FF – c4).

Furthermore, there is a signature with the serial number and the production year on the soundboard:

Erard was sending a grand piano to Ludwig van Beethoven in August 1803. However, according to the latest research, the instrument was not a gift from the company to the composer, as it was long believed. Beethoven ordered the fortepiano at a price of 1.500 francs without decoration (bronzes) (see Skowroneck T .: Beethoven the Pianist, Cambridge University Press; 1. edition: May 2010).

Beethoven’s grand piano has the serial number 133 and is absolutely identical to the piano in the Eric Feller Collection. The exact date when the grand piano was delivered to Beethoven is not documented (however, the instrument must have arrived by October 22nd). The new Erard piano in Beethoven’s possession was the composer’s first instrument, which was not made in the Viennese style and had an immense influence on the composer’s work. Beethoven became aware of Erard by the instrument of his teacher Joseph Haydn (1732 – 1809). He had received a piano from Erard in 1801. An absolute novelty was the una corda pedal, which at that time was not available for Viennese instruments (in English instruments the una corda pedal has been used since the 1780s – the earliest evidence of such a pedal in an instrument by Streicher is from 1807 (see the instrument in the Germanisches Nationalmuseum inventory number: MINe 135) and from Walter from approx. 1810). The expanded keyboard range to 5 ½ octaves also offered the composer more options.

After the arrival of Beethoven’s new piano we can see how highly the composer was influenced by the new instrument. The “Waldstein Sonata” (No. 21, Opus 53), which was created in December 1803, is a testimony to this.

But not only Beethoven was inspired by the new instrument. So did other piano makers, such as Nannette Streicher, with whom Beethoven had a friendly relationship and who saw in the Erard grand piano new ideas for improving and developing their own instruments.

Beethoven left the instrument to his brother Nikolaus Johann in 1824/1825 who finally gave it in 1845 to the Oberösterreichisches Landesmuseum in Linz.

Alongside Beethoven and other composers and musicians, the art-loving aristocracy belonged to the clients of Érard. For example, the grand piano with the serial number 97 was delivered to the famous Madame Julie Récamier (1777 – 1849).

According to the company’s original production books, now in the Conservatoire de Musique in Paris, the piano costs 2,700 francs, made in three payments of 900 francs each. Furthermore, the register shows the famous provenance of the instrument: it was made for the Mackau family.

The instrument was commissioned by Armand – Louis de Mackau, who was born on 29 May 1759 in Vitry-sur-Seine. He was an army officer and ambassador of Louis XVI. in Stuttgart and Naples. His sister was Angélique Charlotte de Mackau, Lady de Compagnie (1762 – 1800), known as the Marquise de Bombelles. She was a governess of the royal family and took over in part the education of the children of Louis XVI. and his wife Marie Antoinette in Versailles. She was also the closest friend of Élisabeth Philippine Marie Hélène de Bourbon, called Madame Élisabeth, who in 1764 as the youngest sister of Louis XVI. was born in Versailles and executed in the French Revolution in 1794 by the guillotine.

His wife Angélique Madeleine Félicité Alissan de Chazet was born in 1765 and died at the age of 29 in 1794 from tuberculosis. Both married on October 17, 1780 and had two children:

Ange René Armand de Mackau was a French admiral and politician. He was born on 19 February 1788 in Paris and christened the same day. At the age of 17 he entered the navy. On October 7 1830, he married in Paris Albine Muguet de Varanges (1806 – 1875). Both had two children together:

Ange René Armands sister Anne Angélique de Mackau, for whom the grand piano was bought in 1803, was a court lady of Empress Joséphine de Beauharnais (1763 – 1814), the wife of Emperor Napoleon Bonaparte (1769 – 1821). She married on January 20, 1812 General Pierre Watier, Comte de Saint- Alphonse (1770 – 1846) and became Comtesse de Saint-Alphonse. Pierre Watier completed a successful military career. After some successes, Napoleon promoted him to an adjutant and due to his merit in the Battle of Austerlitz he was promoted on December 24 1805 the Général de brigade. On August 8 1811 Watier was promoted to Général de division and appointed “Comte de l’Empire“. During the First Restoration King Louis XVIII. gave him the medal Ordre royal et militaire de Saint-Louis. After the return of Napoleon during the reign of the Hundred Days Napoleon gave him the command of the “5edivision de cavalerie” (5th Cavalry Division) of the Northern Army for the Battle of Waterloo. In recognition of his services he is immortalized on the Arc de Triomphe in Paris. 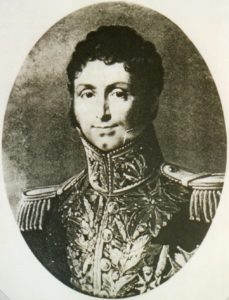 His wife, the Comtesse de Saint-Alphonse was very well educated and led a musical-literary salon at their home at Château de Vimer in the Orne Department of Normandy, where she lived with her husband, who retired after his military career there. He died there and was buried in the church of Guerquesalles near Vimoutiers (Orne department No. 61).

Anne Angélique de Mackau, Comtesse de Saint-Alphonse had an intense relationship with Jeanne Louise Henriette Campan (1752 – 1822) “première femme de chambre” of Marie Antoinette, who later founded a school in Saint-Germain-en-Laye (Napoleon’s stepdaughter Hortense de Beauharnais (1783 – 1837) was educated there). At the intercession of Hortense, Henriette Campan was appointed by Napoleon in 1807 to the director of the school in Écouen. This school was intended for daughters of members of the Legion of Honor.

At this time music was largely a field for the female aristocracy. The piano was considered as a modern and elegant instrument for the ladies.

Anne Angélique de Mackau, Comtesse de Saint-Alphonse used the 1802 Érard grand for learning the piano and pleasure herself and of course to entertain their guests at their salon. For example, Napoleon’s wife, Empress Joséphine de Beauharnais, is known to have ordered three grand pianos at the Dulcken workshop. The piano (as well as the harp) was one of the essential instruments in salon culture at the beginning of the 19th century.

The composer Gaspare Spontini (1774 – 1851) was the favourite composer of Empress Joséphine. In 1807 he composed his most famous opera “La vestale” which he wrote with the support of the Empress. On 3 August 1811 Spontini married Marie Catherine Céleste Érard (1790 – 1878) a niece of Sébastien Érard. Later dedicated his opera “Agnes von Hohenstaufen” to her.

It can be assumed that Empress Joséphine also played the 1802 Érard grand at her visits to Anne Angélique de Mackau, Comtesse de Saint-Alphonse.

Further information about the company Érard Frères can be found here!

Other preserved instruments by Érard Frères: