This grand piano made by the company of Carl Bechstein in Berlin shows impressively the further development of the piano.

The case with the angular shape is made in black shellac and stands on three legs with brass castors. The nameboard is signed with:

The keyboard is made of ivory and ebony, the hammers are covered with felt, single dampers. The piano is cross-stringed over a steel frame and has two pedals for dampers and due corde. The compass is 7 ¼ octaves, AAA – c5. The serial number (9377) can be read along with the signature on the soundboard:

Based on the serial number, the instrument can be dated to the year 1877. This year, Carl Bechstein made a total of 672 instruments and made a turnover of about one million marks, with an annual income of about 80.000 marks.

Carl Bechstein was born on 1 June 1826 in Gotha. In 1840 he was sent by his stepfather to Erfurt for an apprenticeship as piano maker by Johann Gleitz. After completing his apprenticeship he worked with various piano makers and finally moved at the end to Berlin. In 1849 he went to London and Paris to expand his education. Back in Berlin he founded his own workshop on 1 October 1853 and began to build pianos. In 1856 he married Louise Döring. Both had three sons. The contact with famous contemporaries such as Hans von Bülow, Franz Liszt or Richard Wagner gives his instruments the highest reputation and the business expanded. In 1885 he opened a branch office in London and also produced instruments there. Carl Bechstein died on 6 March 1900 and was buried at the Sophien cemetery in Berlin-Mitte. 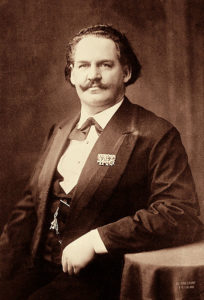