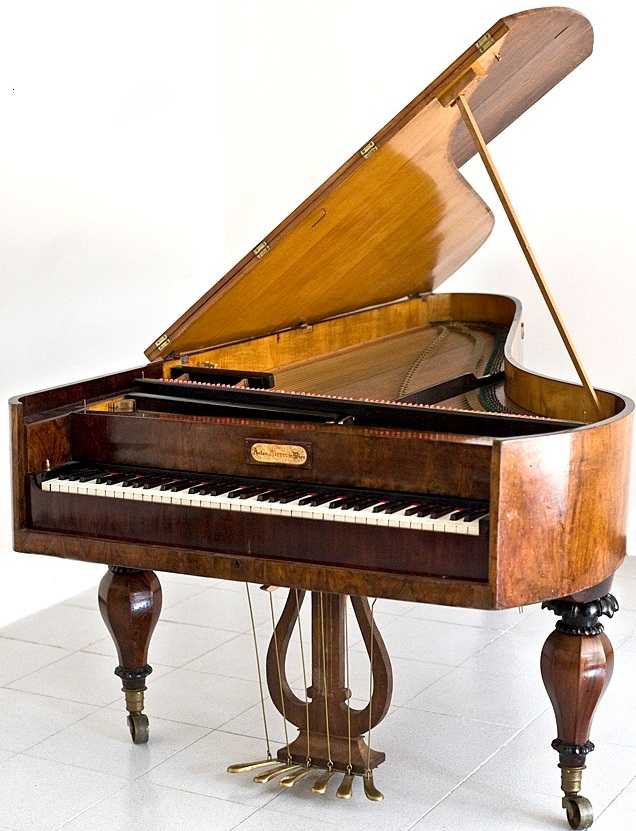 At the beginning of the 19th century London, Paris and Vienna were the major locations of piano making. A variety of instrument makers built instrument of varying quality to serve the demand for pianos. All over Europe the instruments from Vienna were highly regarded by composers and musicians. One special example for that highest craftsmanship is the fortepiano made by Anton Zierer.

The instrument was built around 1820 in Vienna. The triple bent side case is made of walnut rests on 3 baluster-shaped legs, which are probably some later additions. It can be assumed that there were originally Empire style three legs.

The nameboard is decorated with a wooden frame paper tag and bears the signature:

Interesting is that the piano does not yet bear the inscription “Bürger in Wien” on the nameboard. Zierer received this civil rights in 1821. It can be concluded that the piano was made in the time before.

The instrument has a Viennese action. The keyboard is made of ox bone and ebony, the hammers are covered with leather and the compass is 6 octaves (FF – f4). Inside is a metal bar which is original.

Grand pianos of this type were built mainly in the 1820s. Typical features are the many different pedals for changing the sound. At that time there were some instruments with even more pedals. The instrument has 6 pedals which controls damping, una corda, moderator, janissary, bassoon and Tschinelle and impresses with its excellent workmanship and marvellous sound.

Anton Zierer was born in Alsace in 1765 (location and date are unknown). His wife Barbara Helldacher was born in 1762 in Vortloys. It is possible that he comes from there too. It is certain that he has been a piano maker in Vienna since 1816 and was probably already working as an instrument maker in other cities before. In 1821 he was granted the citizenship of the city of Vienna and lived at that time in No. 238 Landstraße. In 1833 the family moved to No. 280 Hauptstraße, where he lived from then on until his death. However, the exact year of his death is also difficult to identify because he has left no will. He probably died around 1835. (See M. Clinkscale: Makers of the Piano 1820-1860, Oxford University Press 1999) 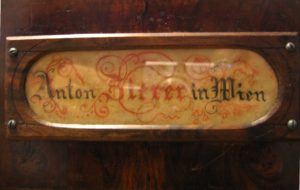