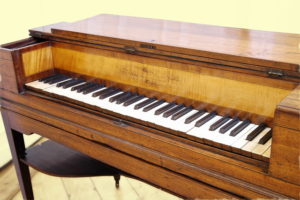 Towards the end of the 18th century, London was one of the great cities of music culture and instrument building alongside Vienna and Paris. An almost unmanageable number of piano makers settled there and made instruments for the increasing demand. Like today, the city was a huge mix of all cultures and nationalities. Particularly many immigrants from the European continent tried to find their luck in the huge city. Political changes, the hope for a new and better life were often the motivations for people to settle there. London was attractive because of its wealth, it was free of restrictive guilds and unlike many European cities, no permission or licence was needed to set up in trade.

In many books you can find the term “The Twelve Apostles” of piano making. How did this term developed and who were these instrument makers?

The first mention of the “Twelve Apostles” was made in 1860 by Edward F. Rimbault in his book “The Pianoforte – It’s Origins, Progress and Construction“. There he says:

“At length, about the year 1760, many ingenious German mechanics left their country and came to England in search of employment as pianoforte-makers; this gave the instrument its first impetus. A party of twelve travelled in one company, and obtained, from this circumstance, the appellation of the ‘twelve apostles’“.

So these men should have been exclusively immigrants from Germany, who left Germany during the 1760s and immigrated to England. The main reason is the Seven Years War. However, this story created by Edward Rimbault is not tenable, especially if we want to take a look at the number of immigrant. Furthermore many other authors accepted this claim, and so this story was used by well-known scientists (R. Harding, M. Clinkscale, H. Henkel and many other authors).

One fact, however, is the Seven Years’ War and the resulting catastrophic conditions for the population. Started in 1756 and ended in February 1763, all former major Countries and States were involved in the war. All had devastating effects on the population. Many soldiers died in the war, the population was decimated (especially in the regions of Saxony and Pomerania), there was looting, severe poverty and forced recruitment. The entire population was deeply traumatized and many saw no perspective in their homeland and emigrated.

But let’s take a closer look at these twelve instrument makers. If we follow the criterion of Rimbault, the following instrument makers immigrated to England from Germany and were active in London:

However, Adam Beyer and Frederick Beck, who were often counted on this list, did not originally come from Germany. (see Michael Cole)

In an article in the Galpin Society Journal from 2004, Eva Badura-Skoda argued that the title “Twelve Apostles” could come from Burkat Shudi’s (1702 – 1773) youngest daughter, Barbara (1749-1776), who later became John Broadwood’s (1732 – 1812) wife. Barbara (speaking German because of her family roots) could have coined the nickname during new German workers who worked often in her father’s (her later husband John Broadwood) company.

The story of the “Twelve Apostles” was taken up again and again or adopted by many other authors or changed. Each author had partly different criteria for the compilation. Thus, some of the following other instrument makers could be found in this circle too:

Overall the research is still very incomplete and from time to time instruments appear whose builders have not yet been mentioned. In conclusion it can be said that the term “Twelve Apostles” is very unconcrete used in literature. The term was often used by no exact criteria and was partly adopted and unreflected used by other authors.

But independently Edward F. Rimbault created in 1860 a story about “his” “Twelve Apostles” that lasted to these days and which had a lasting effect on many generations of musicologists.