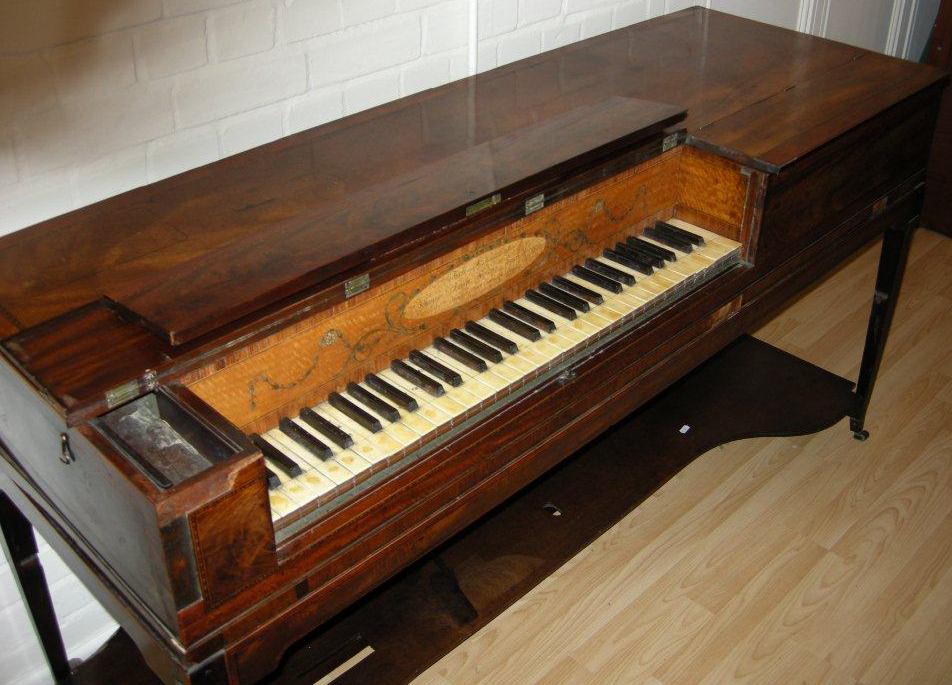 The case and the original stand are made in mahogany with inlays in different woods. The stand has got a cross brace on the floor with pedals and is decorated with oval brass fittings. The instrument has a second action and is double strung. The keys are made of ivory and ebony. The nameboard is decorated with garlands, flowers and tendrils. In the middle is an oval cartridge containing the signature:

“Schoene and Co. Successors to /

The instrument has a nag-heads swell, dampers and lute stop controlling by wooden pedals.

This is currently the second oldest of 3 square pianos made by Schoene in the Eric Feller Early Keyboard Collection. All three instruments feature identically designed nameboards and signatures. Also action, dampers and swell are the same.

These charming instruments are all well made and show a high quality of cabinet works.

Schoene & Co. is closely associated with Johannes Zumpe (1726 – 1790), who built the first pianos in England in the 1760s. The company was founded by the two brothers Frederick and Christian Schoene, who immigrated to England and were in business relations with Zumpe. Interesting is that the name “Johannes Zumpe” is written much thicker and set in the centre of the nameboard then the makers name “Schoene & Co.” or “Schoene & Vinsen”. Due to the great reputation that the instruments of Johannes Zumpe enjoyed, the two brothers wanted to advertise with his name in order for a better selling of their instruments. It can be assumed that the two brothers paid Zumpe an annual license fee for that.

The oldest instrument of the two Schoene brothers dates back to 1781 and bears too the inscription of Zumpe.

The company achieved great success with its instruments until 1789 – with the French Revolution, success abruptly ended. The great success of the company was due to the export of instruments to France and other countries on the continent. Sebastien Erard and other French instrument makers copied and improved the Schoene Brothers’ instruments.

This competition and the failure of the continental market almost led to the bankruptcy of the company. In order to counteract the growing financial difficulties, Thomas Vinsen joined the company in 1794 as a new partner (and with new money…).

1795 Christian Schoene died and Thomas Vinsen continued from 1799 along with Frederick Schoenes son, George Frederick the company. At the same time they moved into Paddington Street no. 45 in London.

George Frederick Schoene soon turned his back on the piano-building business and worked as an artist and engraver. 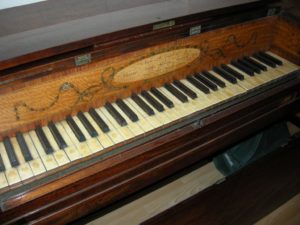