This elegant Empire concert grand piano comes from one of the most famous workshops in Vienna: Nannette Streicher. The instrument was built in 1822 and is characterized by its great length of 250 cm and absolutely charming sound.

The case is made in mahogany and decorated around the keyboard and on the lyre with original fire-gilded bronzes. The keyboard is made of bone and ebony. The compass is 6 octaves + fourth (CC-f4) and the instrument has a Viennese action with 5 pedals (dampers, una corda, moderator, double moderator, bassoon).

Above the keyboard is the signature on a ceramic plate with brass frame:

Furthermore there is a signature on the soundboard which bears the serial number 1651. Inside the piano is the original dust cover which is covered with yellow silk. 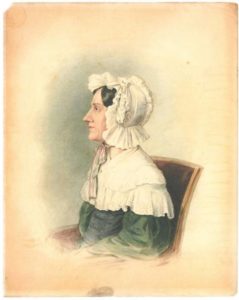 Nannette Anna Maria Streicher was born on January 2, 1769 in Augsburg. She was the daughter of the famous piano maker Johann Andreas Stein. Their instruments belonged to the best of the time and were played and appreciated by famous composers such as Ludwig van Beethoven.

At the age of 7 she worked at her parents’ workshop and at the age of 10 she worked on piano actions and made regulation work. Besides her early occupation with instruments, she was also a very good pianist. So she played in 1777 for Wolfgang Amadeus Mozart during a visit of the composer.

Together with her brothers Matthäus and André Stein she worked together in the family business and all took over after the death of their father in 1792. In 1794 she married Johann Andreas Streicher (1761 – 1833) and moved to Vienna with her brother André. In 1802, the two ended their professional partnership and both started a business alone. Under the good leadership of Johann Streicher and the outstanding instruments, the company flourished and instruments were shipped all over Europe. Ludwig van Beethoven became a good friend of the family.

In 1823 Nannette took her son Johann Baptist Streicher (1796 – 1871) as a business partner into the company, which he continued to run after the death of his parents.