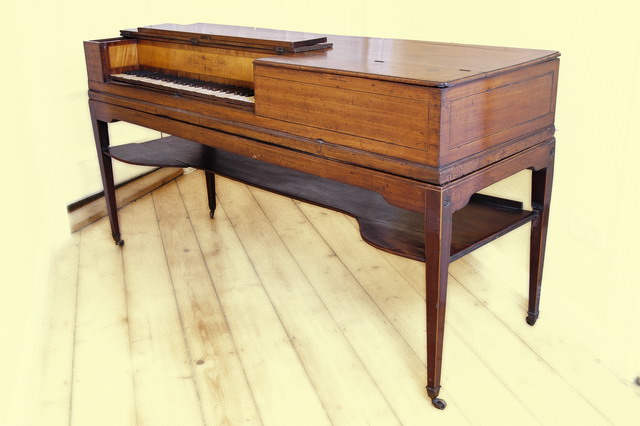 Christopher Ganer was one of the “12 Apostles” mentioned in the literature who emigrated to England in the mid-1760s. This square piano shows the continuous development of the instruments towards the end of the 18th century. In comparison to the square piano from 1780 (click here) in my collection this instrument is characterized by a larger compass and the development in the action from the single action to the second action.

The case of this instrument is made of solid mahogany with inlaid ribbons. The original stand is decorated on the sides with bronze applications. The nameboard bears the inscription:

The first key is also stamped with “M“ and “5”. The keyboard is made ivory and ebony.

Inside the piano there are two stops for dampers and lute. The hammers are covered with leather and the action is a second action.

Christopher Ganer was born around 1750 in Leipzig. Like many other instrument makers he left the continent and is from 1774 in England as a harpsichord and piano maker (as well as a harp maker from about the mid-1780s – see the signature on the nameboard “Harp Maker”) detectable. At that time, his workshop was at Broad Street 22, Golden Square, and later at Broad Street no. 47.

In 1774 he married Lydia Willey and had four daughters and a son who died in childhood.

Special by all instruments of Christopher Ganer is that he built the typical “trestle-stands” as well as from 1777/78 in fashion coming “french-stands“. His skills as an excellent cabinet maker made him build particularly elegant instruments with high quality inlays. In 1782 he built an instrument for Princess Amelia. All his instruments are individually designed and none are alike.

Until about 1784 Ganer always dated his instruments with the Latin inscription “Christopher Ganer Londini Fecit“.

Other surviving instruments by Christopher Ganer: